Fresh water is the most fundamental requirement for life, yet supplies are limited. In certain areas, fresh clean water is a scarce resource. Of all the water on the planet, 97.5% is salt water leaving only 2.5% fresh water. Of the world’s fresh water, nearly two thirds is unavailable because it is frozen in ice and permanent snow. Therefore, less than 1% of all the water on the planet is fresh and available for use. Only 30% of clean, fresh, available water is used in Municipal, Industrial, Residential, Commercial and other ways for significantly greater economic value than irrigated agriculture. 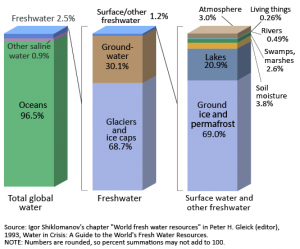 Forecasts by the United Nations Education, Scientific, and Cultural Organization (UNESCO) project that by 2030, 47% of world population will be living in high water stress areas. Growing demand for water is being met by improved efficiency and re-purposing to higher value uses.

Free markets allocate scarce resources most efficiently yet in most places, water does not trade freely. We believe growing scarcity supports expanding water markets. We believe two geographic areas possess this combination of characteristics at this time: Southeast Australia and Southwestern U.S.

During the 20th Century, large-scale water storage and conveyance systems were built throughout the U.S. but particularly in the arid Southwest. The most significant water projects built in the Western US are listed below.